I think I'm going to give dating another try; though this time I want to keep it on a just friends, not even kissing level for a good long time.

I've found out a number of things about myself and people in general. The primary one, I think, is that it is OK if I keep looking for years for a really remarkable woman. I am an unusual guy and I can look for an unusual girl, and I shouldn't feel like it's being arrogant if I don't think falling for me is enough. I've never had anyone not want to continue after a date; actually except for my two marriages I've yet to be the dumpee instead of the dumper if there was at least one date. So that's both why I want to keep it just friends, and why I think I can be selective. And if I can be selective, I should. Why would it be of net benefit if I took the first instead of the best?

UPDATE: On second thought, too simple and reductionist even with all the 'generally' and 'I think' etc. I still think it's an interesting trend, though.

I've heard the theory, attributed to Dan Savage, that kinks come from people's fears (though I haven't found a reference). My theory starts with that and takes it a few steps farther. Here it is:

Men generally are taught by the culture to be afraid of being disgusting; men's kinks are mostly oriented around either overcoming that or owning it but saying it's OK.

Women and men, of course, both have more fears that impact their sexuality than I list here. These are the ones I see as primarily shaping kink, though.

The idea that men are gross, disgusting, and unattractive is one we are trained to constantly from a very young age. "Sugar and spice and everything nice, that's what little girls are made of. Snips and snails and puppy dog tails, that's what little boys are made of." Do a Google search on "boys smell better than girls" and take a look at the results. I did it both ways to compare but since "boys smell better than girls" mostly returns "Why do girls smell better than boys?" that one pretty much makes my point by itself. Lots of those answers are to the effect of "girls care more", which is a self-fufilling prophecy insofar as it is true. Media mostly pictures guys as something girls put up with if and when they want something. I just recently wrote on
Posted by UncommonMurre at 3/22/2012 11:30:00 PM 2 comments:

New favorite video: the Steve Porter techno remix of a Henry Rollins rant against techno. Featuring clips of the Techno Viking, who dances rather like I imagine I do.

Email ThisBlogThis!Share to TwitterShare to FacebookShare to Pinterest
Labels: Ephemera

I rewrote my post My line and perceptions of the availability of sex and it was published over at Role/Reboot as Male kindness isn't always a mask for desire!
Posted by UncommonMurre at 3/15/2012 09:19:00 AM No comments:

Email ThisBlogThis!Share to TwitterShare to FacebookShare to Pinterest
Labels: Ephemera

For a while now, I've been keeping an eye on the Kinky And Popular feature on FetLife. It's a list of pictures that some secret algorithm decides are popular, probably based on things like views, comments, people bookmarking it as "loved".

To get on there as a woman, you generally have to be slim, pretty, conventionally attractive, though not necessarily. I'm sure there's lots of diet, exercise, makeup, hairstyling generally involved. And you mostly have to be posing in a sexual way or doing something at least a little kinky; for your best chances, with another woman.

To get on there if you're a man, you have a few choices, listed from commonest to least common.

If there is a man involved in the action at all, you can be a faceless prop, attached to the cock being sucked, or the (invisible) face being peed on, by the woman who is the focus.

You can do all the stuff the women do, plus present as/identify as a woman and (usually) take female hormones to develop breasts.

Or, once, I've seen a cis man as the focus. A pair of cis men, actually. Shirtless men in jeans and striking ballerina poses (I do not believe that pose is typical of a ballerino) using the handrail in a dance studio. Clearly going for comedy by their expressions. Making a joke of themselves aspiring to the beauty or attractiveness the women can. (If you're on Fet, it's this one.) I do think it's good that we joke about it.

It's really difficult for a woman to be the focus; requires good genes, work, and more than anything else, luck. But a man can only do it by all that plus altering his body and gender identity to become a woman, or rarely, mocking his own inadequacy in a woman's domain.

Men don't usually talk about this kind of thing because we don't want to be seen as complaining. We're tough. But I think people should be aware of it because it underlies a lot of the differences in cis male and female behavior; this is just one example of a pervasive phenomenon. Can you name any female supermodels? Any male ones?

This is not the fault of women; it's because it's men doing most of the clicking and commenting. Men write most of the screenplays I see which have the same prejudice built in. Men write the commercials and jokes that mock men who try to be unapologetically sexy.

I've heard people on FetLife complain that so many doms are sociopaths, who care nothing for the feelings of others. Given an environment that says men can't be really sexy, how does one get the confidence to be a dom without being a sociopath, unless one is domming to compensate for feelings of insecurity and inadequacy?

Cleaning theory for the worst of us

I've mentioned once or twice before that I am definitely one of the worst of us when it comes to cleaning. You've seen much worse if you've lived in a dorm, but still, not so good. This may be a useless idea for most of you that are more sensible than me, but perhaps you may find some area of life where it applies.

My problem is the one the famous Allie of Hyperbole and a Half expressed so well in This Is Why I'll Never Be An Adult: 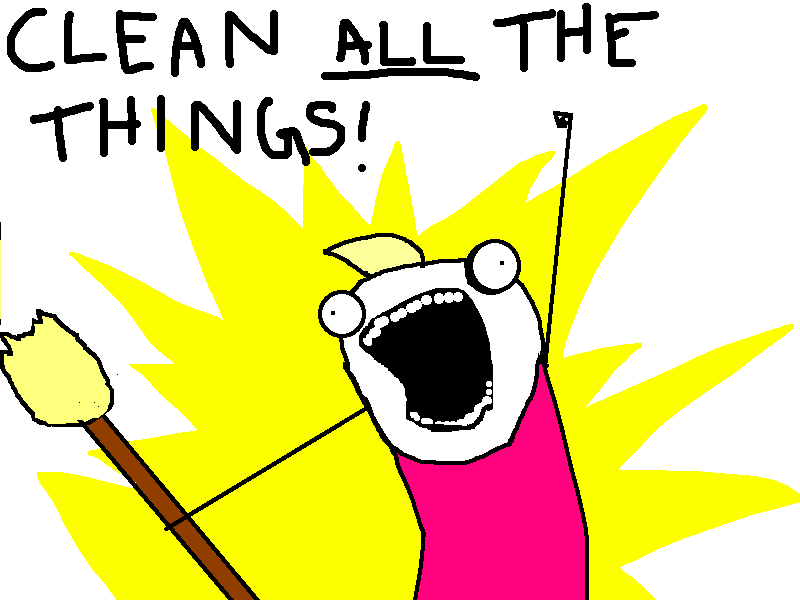 When I started to clean, I've always picked a room and then tried to make it spotless. Note the room was always starting from a state of layers of greasy dog dander dust and dust & fur rhinos. Using a bagless vacuum I would end up emptying the cannister two or three times, in piles of dusty hair the size of a small cat each time. Starting from there and trying to end with all tchotchkies shining was usually impractical, especially with all the time I spent running around the house with objects trying to put them all in their proper place. So it was intimidating and depressing and left me thinking I'd failed whenever I cleaned. 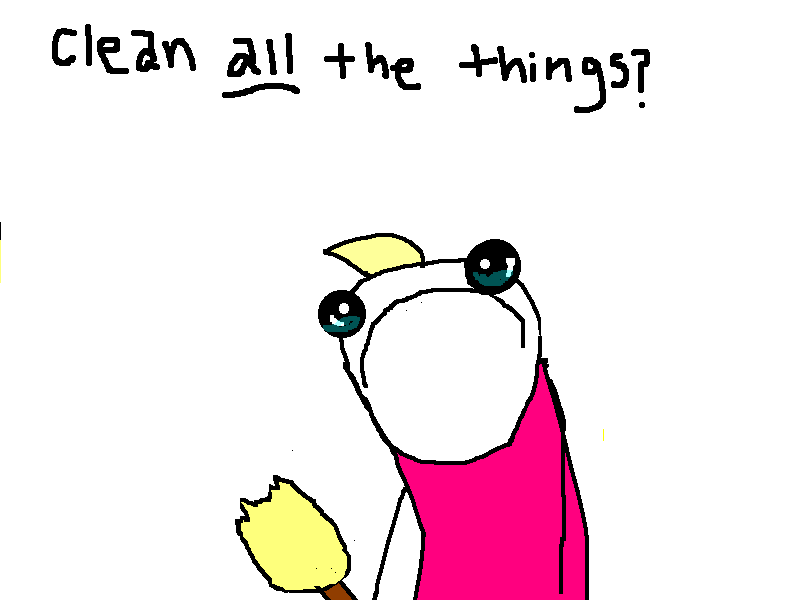 Reflecting on Allie's "Why I'll Never Be An Adult," suddenly I connected this way of thinking with something Dennis Prager's wife says: "It's better than it was." Also, with "Perfect is the enemy of good enough."

I hit upon a new plan: Every night before I go to bed, I try to make the house cleaner than it was last night when I went to bed. This has been working well for a week, with a modification suggested by a friend: build days off into the schedule. E.g., Tomorrow night I want to go to a ballroom dance class that will leave me with no time for cleaning after work.

Tragedy of an Unwanted Sub

Sometimes N. still texts me to say she misses me. (I always respond that I miss her too, which is true.) After I told her that the romantic relationship was over, we tried to remain friends. There were problems, but I thought it might be OK overall, until one evening when I friended another woman on FetLife, and N. flooded me with distraught text messages about it. I was at dinner with a third woman, who is a friend only, at the time; but I felt like I had to hide that, or hurt her more. So I told her I thought this was no good for her or me and we couldn't keep hanging out together.

The tragedy, that really makes me want to cry about this, is that N. is a giving sort of sub, with such a good heart. She would have done anything I wanted, but I didn't want her to do anything. It doesn't seem fair, or right, that a person could offer so much and then not have it wanted. I feel that so much, I guess, because that's how my sub side works too; I want to increase my value by being willing to do anything, and when no one seems to want you even then, it cuts really deep.

For me this is OK now. I am wanted, though only for my dom side or vanilla side, so far never for my sub side. For N. and so many subs I see on FetLife making wistful posts about their future forever dom, it's really sad.

I eventually picked UncommonMurre as the new name, which I'm planning to keep.  Also I have a new email address, which is as you would guess, new name at gmail dot com, but will continue to check the old one.

I like the way a murre can be found in water, on land, and in the air.  (So can a duck or gull or several other birds, of course, but murres seem cooler to me.)  I sort of feel that way myself sometimes.  A murre isn't adapted to the water like a swordfish, the air like a swallow, or the land like a deer; but it has it's own niche between them all.  Likewise, I'm not really church guy, or kinkster guy, or programmer guy, but my life is in all of them.
Posted by UncommonMurre at 3/05/2012 10:01:00 PM No comments:

UncommonMurre
I'm a cis male Christian who was divorced at the end of 2010. I don't intend to have sex with anyone again until I marry again, though I'm really looking forward to it. Also, I'm a kinky heterosexual switch.

I love comments on old posts. Your comments will always be welcome no matter how old the post is.

What people are saying about my sanity: "Otherwise you sound like you're getting less mad. Have you ever gone back and looked at your earliest posts?"